Apparently it's the 30th anniversary of one of my all time favorite sci-fi classic movies... and no, I don't mean Empire Strikes Back. All you misguided fools can keep your precious second film in the Star Wars trilogy, yes, it's one of the greatest films ever, but better than the first?? the original?!? Hardly!!!

But I didn't take a moment to argue the merits of Star Wars over Empire (although I could, at length), no, I'm talking about another cherished sci-fi blockbuster from the Gen-X lexicon, I'm talking about a bolder, louder, stranger, crimson colored, gold plated gem... the one and only Flash Gordon.

And just like the merits of episode four over five, I could go on and on about dear Flash... how I still recall the first glimpse of the trailer on our old black and white 12" TV and proceeded to rave about it to my parents, even describing the color of Ming's crimson guards, despite only seeing them in gray scale... the jaw dropping moments of hilarity and fun upon first watching at theaters... and sharing the love of the film with friends on cable (as only pre-teen boys could enjoy and share in such a wondrous work of pre-teen fantasy brought to life)... Max Von Sydow's Ming is pure genius, the green blood, the tree stump, the death duel with Hawkmen, the perfect crescendo of a climax... but where's the time for that? I just wanted to pop in and give a quick mention of the milestone, and link to a page that's been making the rounds, a Flash Gordon fan page on YouTube... HERE

While there's not a terrible amount of content there, it is well done and interesting, comparing some differences from cable to DVD, and scenes with the final (and much cherished/maligned) Queen soundtrack, versus what was intended as a full orchestral score. Just an interesting spot for fans of the film, with hopefully more to come.

If anyone knows of more content/pages out there, be sure and let me know!

Posted by Jason Martin at 10:26 AM No comments: 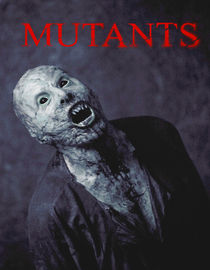 Basically French zombies, that's Mutants.
It's a French film, in French, with subtitles, but the subtitles aren't a problem as the dialogue is light, and really, aside from the dialogue, the film doesn't feel overtly French or foreign.

Read more »
Posted by Jason Martin at 8:39 AM No comments:

The event was held just outside downtown Seattle at the Seattle Center, which is a large area that houses the Space Needle, Music Experience museum, Key Arena, Opera House, convention/exhibit centers, parks and more... 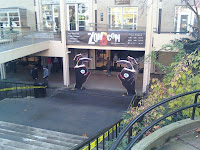 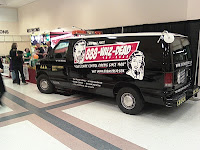 The exhibit hall entrance, and T-Shirt Bordello zombie removal service vehicle.
Having just been there last month for the first ever Jet City Comic Show, it's a good location, but also a bit odd, in that it neighbors the Opera House/Ballet center, so you get a wild mix of crowds, and also, the main hall of the Seattle Center (or at least the one that housed both Jet City and ZomBcon) is a bit of a dive... being a sub level hall, that's old and dingy... fitting for a zombie convention perhaps, but still rather uninspiring. However, on the plus side, there's parking across the street and many restaurants and bars nearby, and for the tourist inclined, you can't beat being beneath the Space Needle. Then back on the flip side again, for ZomBcon, many of the events, panels and activities lined up, were not actually in the same building as the convention hall, which is a bit odd, and caused traffic to dip and peak wildly as different events took place either on site, or off.

The exhibit hall itself is pretty small, and ZomBcon didn't even use the full floorspace, so it made for a fairly small convention floor. But with such a micro focus, zombies, the floor still offered a wide variety of exhibitors, and plenty to look at when not in line at a signing or at an event. I'd be surprised though if attendees didn't get their fill in one pass through, so there's still plenty of room to expand on what was offered...

For us, we had a nice corner booth, with plenty of exhibit space, which is always appreciated. It was our world debut for Zombie Tramp, and we were offering a free Seattle themed ZomBcon print with purchase of the book, so there was plenty of space to showcase all of that in addition to the full catalog of SRG books, and my personal stuff. 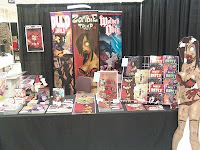 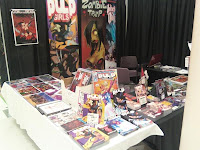 SRG booth, complete with life size Janey/Zombie Tramp!
Aside from plenty of space, we had a great location, just the other side of the main stage, where all guests and many presentations appeared. So, whenever a new guest entered the hall, we could quickly turn to see them and check things out... Plus, I could still operate the booth and listen to whatever Malcolm McDowell, Bruce Campbell, or George Romero had to say (or see when their line got small enough to get some face time myself!)... 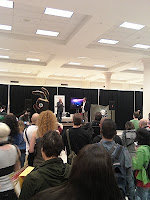 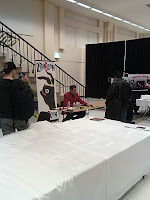 In addition to the big three movie guests, the con also hosted a couple huge literary names, Max Brooks (World War Z), and Chuck Palahniuk (of Fight Club fame). Both of which my wife was excited and tickled to see. And with the con being relatively as small as it was, it made for great access to the guests. For instance, when she went to get some free zombie make-up applied, she wound up talking with Chuck Palahniuk who was checking out the process while they worked on her.

Another big difference between this convention, and the comic book shows I've always done (this was my first non comic book convention), was that the fans were mostly in full zombie gear... Sure comic shows have tons of cosplay, but it's different to see all the costumes skew to one theme! 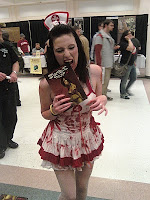 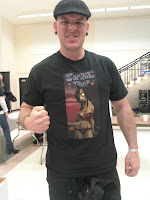 You'd think this girl was inspired by Zombie Tramp, as she was practically dressed in character straight out of the pages (so of course she had to have a copy), and then many cool new fans were made, like this gentlemen sporting his recently acquired Zombie Tramp tee the next day! 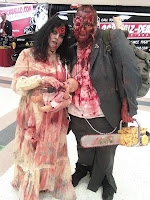 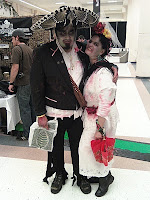 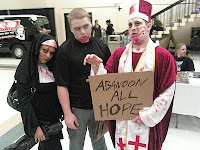 Some of the more inspired zombie costumes!
Overall, ZomBcon was a blast, and one of the best conventions I've done, both in terms of sales, and enjoyment. I'd hoped having a new zombie graphic novel would be a good fit with this type of event, and it proved to be true, so that wasn't too surprising. However, the combination of cool guests, focused programming, and smaller first time show made for a very enjoyable experience as a fan. The show wasn't without many flaws, but with the zombie prom (and it's awesome 80's retro band), access to guests, and many options on parties and activities, I'd think a zombie/genre fan would be hard pressed not to have a kick ass weekend! I know we did.
Not to mention meeting so many cool fans and exhibitors, like our neighbors at the T-Shirt Bordello (from whom I got a few awesome new shirts), and Zombie Cagefighter (and MMA star) Nate Quarry!

But, for me, the highlight of the event, and one of the highlights of any convention I've done over the years, was the chance to meet Mr George A Romero, get a picture with a living legend, and talk with a true inspiration to me as an artist and creator. Plus, turns out, he's incredibly nice and easy going, which is always cool, because many creators and celebrities can turn out to be quite the opposite. I asked him if he had anything lined up post Survival of the Dead, and he said that he was still actually traveling and debuting that world wide... so nothing brewing yet (that he was willing to share with me)! 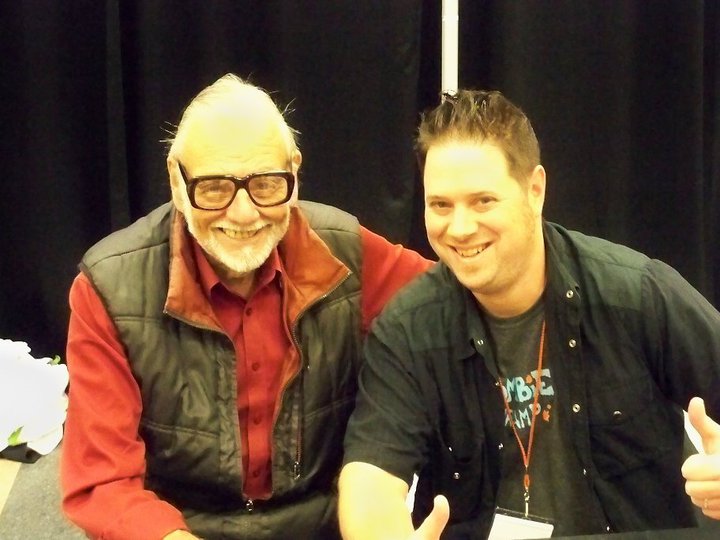 So yeah, ZomBcon? Two thumbs up from this guy!
See you next year!!!

Posted by Jason Martin at 5:25 PM No comments: