Help fund new printings of the final two issues of my first comic book series, Super Real, to keep the series in stock for its 15th anniversary! 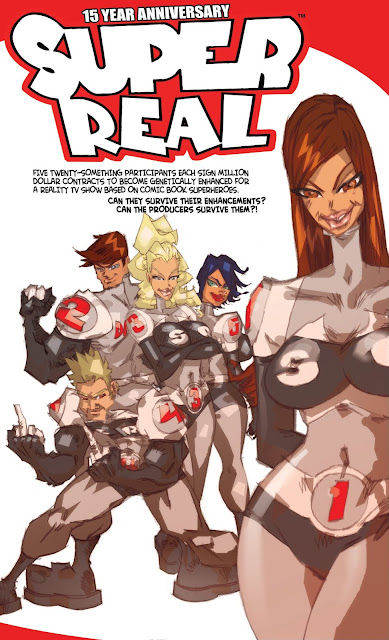 I started my creative journey into comic books with a self-published series called Super Real, which I debuted with a preview book ash-can at San Diego Comic Con in 2003. The book was a send-up of reality TV and comic book superheroes that would officially see release to comic book shops beginning in November of 2005. Along the way it received great reviews and built a solid fan following. And then in 2010 it was released as a graphic novel, collecting all seven issues of the series, my passion project, in one self contained over-the-top epic story that completed the series. And while the first five single issues were mass produced, the last two single issues were not widely distributed, and my stock on those last two books (as well as the graphic novels) has since completely sold out and been unavailable for some time.

Since I still have plenty of stock on the early issues, and each of those had limited edition variants, I'm looking to raise some funds for new printings of those last two single issues, issues 6 and 7, the climax of the story (issue 6 was double-sized and 56 pages, while issue 7 was an extra long 28 pages of story). So I'm offering up new special limited edition versions of these new printings for those  issues to raise some money to print up inventory of the regular versions as well, and then have stock on the entire 7 issue series once more.

With your help I can keep the full story in print and available to all my new fans from books I currently work on like Vampblade, Danger Doll Squad, and PRINCE-S STARthief, etc.

I'm still really proud of what I did with Super Real (doing everything on 5 of the issues, and then collaborating with many talented artists on the two special issues) and don't want it to go out of print. Creating new printings of those last two out of print issues will allow me to offer the complete story again online and at shows, and keep my first comic work in circulation during it's 15th anniversary of creation!!

Please take a look at the special edition books below, and thanks for helping out!

There are new exclusive versions of the final two issues featuring new amazing cover artwork from a couple of my most recent comic book collaborators - Bill McKay (who I worked with on Night of the 80s Undead), and Celor (who was the artist of my PRINCE-S STARthief) - which are being offered as a pre-sale FOR 10 DAYS ONLY IN MY STORE (starting on Friday 12/7/18 at midnight and ending on 12/17/18) EXTENDED - will close on Friday 12/21:

You can pick up the whole series by getting the issue 1-5 sets in addition to the new issues 6 and 7.

Or you can also pick up individual copies of issues 1-5 via my eBay listings HERE
(Or add them to orders from my store for the same pricing, just email me and I can get you a PayPal invoice for whatever items you'd like, or can help with any questions - jasinmartin@hotmail.com )

The special edition books will be printed once the 10 day pre-sale is over and begin shipping on or around January 7th 2019.

*The books are new printings of the original releases (with story and artwork by me).

As an extra 15th anniversary bonus, the first 20 people to order any special editions will also receive a free copy of the original 2003 San Diego Comic Con preview flip-book ash can! - copies have been allocated


It's X-Men meets The Real World in an over-the-top, genetically enhanced, nipple twisting, lethal middle finger flipping mash-up of comic book fiction, pop culture, politics, and ultra-violence!!!
Upstart extreme programming network X-TV want to create a reality show beyond anything that’s been done... bio-tech firm Geniburton want to slip their stem-cell based genetic enhancements out to the private market... Super Real is born! Casting five participants with the physique to rock nano-skin jumpsuits, and the desperation to participate in dangerous genetic manipulation, all for a million dollar paycheck and TV celebrity may not be a problem. However, keeping them alive and under control once they’re given superhuman abilities is another story!!!


The final two issues, issues 6 and 7, which are being offered in new limited editions HERE feature new cover art and the original interiors by series creator Jason Martin, which conclude the first series.

I always envisioned Super Real as a trilogy of sorts, with each series a different concept in an overall connecting story. I even started work on the second series, Super Clone, after completing the first (there was a preview book at the 2010 San Diego Comic Con). And I'd still like to get back to that... lets just hope another 15 years don't go by before I get things going! :)