My new book, NIGHT OF THE 80'S UNDEAD (which you may have heard about for a little while here), is in the Diamond Previews catalog just out today, for books shipping to comic book shops this June.

Here's the full solicit info for the book: 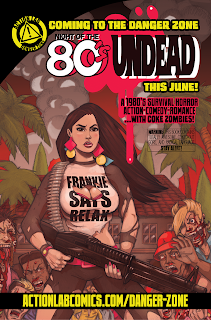 So there you go, if you frequent comic shops, preoder now, if you don't, you can pick it up from one in June.

Or, if you live on the web and have heard of Kickstarter and want to order yours now, then you can get one HERE

Email ThisBlogThis!Share to TwitterShare to FacebookShare to Pinterest
Labels: Kickstarter, my comics, Night of the 80's Undead

You might have heard me mention, I'm heading up a new mature readers creator-owned comic line, ACTION LAB: DANGER ZONE, and our first batch of books were in the March Previews catalog... well, a new batch of books are in the April Previews catalog that hits comic shops this Wednesday, so I thought I'd post a link where you can preview all of the books right now online (or on your mobile devices) - HERE

That's right, you can check out seven new upcoming comics - from horror to comedy, sci-fi to street crime - right now, online, free now, and pre-order them for their May and June releases!!