Based in Beaverton, Oregon, comic book creator, writer, and artist Jason Martin has worked in and around the comic book industry for over 10 years. Working both behind the scenes as a publisher, and as a creative in every aspect of comics.

Specializing in offbeat pop culture inspired fare, Jason first created and published his own comic book series, Super Real, and then published works for other creators under his own Super Real Graphics imprint. Jason is currently working on a new imprint of creator-owned comic book concepts, Pulp Girls.

Recent works of his own include the crowdfunded Pulp Girls concepts; PRINCE-S STARthief and Swiss Army Woman, and the long-running ongoing monthly series Vampblade. As well as recent mini-series' Amalgama: Space Zombie, and Danger Doll Squad. Jason has also co-written for the popular Zombie Tramp ongoing series, and created Night of the 80s Undead with artist Bill McKay.

Jason has also worked as a freelance artist and has done work for clients such as Adult  Swim, Upper Deck, Topps, and more.

When at home with his wife and chihuahua, they spend countless hours watching TV and movies, and Jason loves drawing those latest pop culture inspirations, often creating fan art for many of them to share online and at conventions under the JMart moniker.

FULL COMIC BOOK CREDITS (most books are available in my store): 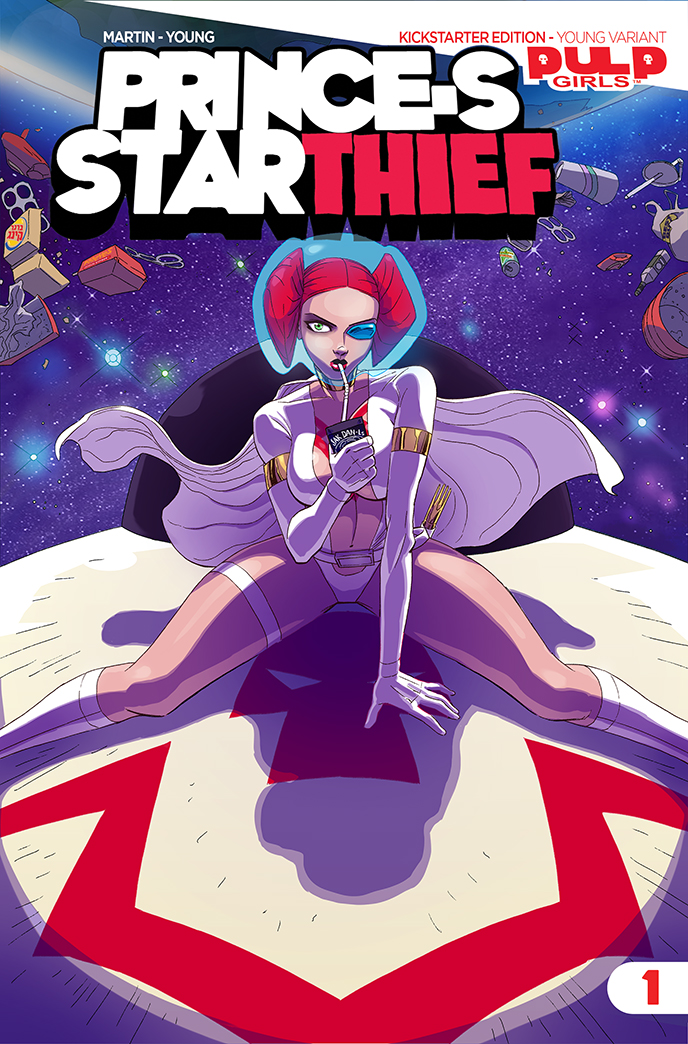 An all-out thrill ride of a sci-fi story set in a future where mankind, enslaved by monarchic corporations, has spread like a disease to the stars. Our PRINCE-S is the daughter of one such “royal brand”, who, instead of going through with her arranged marriage, travels the galaxy causing trouble for her powerful family! Striking out on her own, she slips through corporate fingers to steal and stockpile the galaxy’s most lethal toys.
Featuring the always amazing artwork of my frequent collaborator, Winston Young.
It’s like Star Wars meets Tomb Raider by way of Aeon Flux in a comic book series full of SPACE, DRUGS, and ROCK-N ROLL!!! 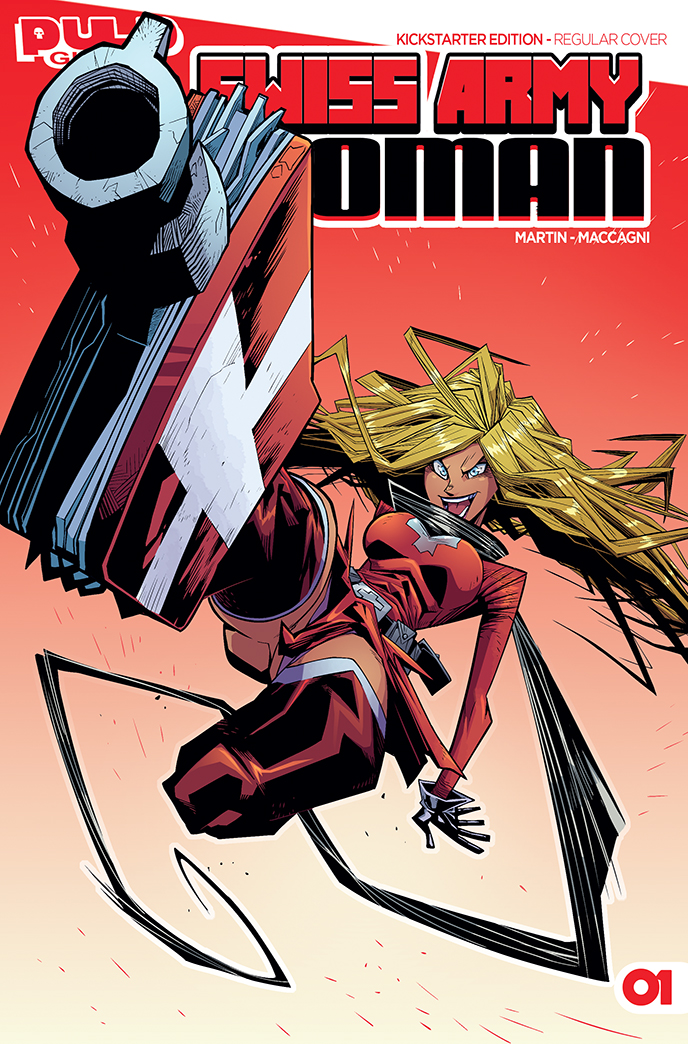 An Olympic skier turned living weapon for the Swiss Army, our Ms Swiss kicks hyperactive @$$ with any weapon conveniently within... leg's reach! Swiss Army Woman is a blend of some familiar inspirations that create an explosive action comic with an animated flavor all its own, and showcase the finely honed talents of artist Marco Maccagni.
It's Cherry Darling meets Batman The Animated Series by way of Switzerland!! 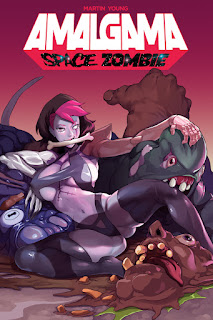 Now in her own Danger Doll universe series, Amalgama is a mash-up of fan favorites Zombie Tramp, Vampblade, and DollFace - with the powers of all three iconic characters - genetically engineered and thrust into space. She’s a drop dead sexy apex predator on an undead killing spree full of non-stop explosive sci-fi grindhouse action!!

"Other comic companies can release books with “metal” in the title but this is the most unapologetic full volume heavy metal comic I’ve read in years."
MaskedLibrary.com 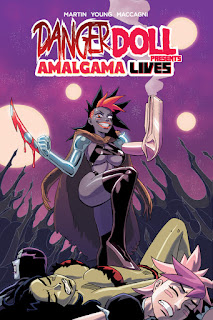 Spinning out of the events of the last Danger Doll Squad mini-series, it’s the all new origin of the fan-favorite mash-up character - featuring the powers of Zombie Tramp, Vampblade, and DollFace combined - now in her own cosmic adventure!!

"This book is innovative, different and completely balls to the walls fun."
Reading with a Flight Ring 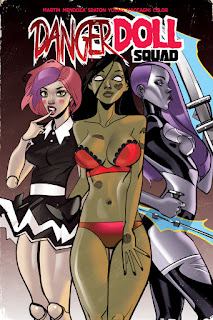 Once upon a time, there were three lethal ladies: Zombie Tramp - the dark magic undead killing machine, Vampblade - the comic geek turned other-dimensional vampire slayer, and DollFace - the 17th century witch hunter imbued in a life-size ball-jointed doll. When all three girls are forced to work together to save the world from the combined threat of their enemies they become The Danger Doll Squad. These are their explosive adventures!! 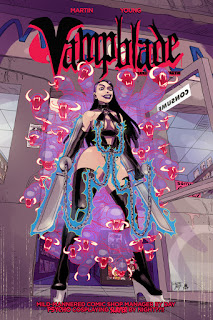 Detroit comic shop employee Katie Carva grew up reading an obscure 90s bad girl comic about a mysterious woman in black leather and impossible chains who wielded two giant blades and fought bizarre invisible other-dimensional vampires. She got older and found better books. But when mobsters break into her store and kill the owner, she's forced to take up the forgotten replica blades from that book, only to find out the comics were all too real and she herself has been transformed into... VAMPBLADE!

“Vampblade has the perfect mix of horror, action, and comedy”
HorrorTalk.com 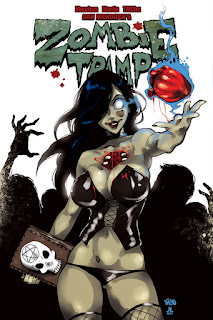 Once escort to the stars, turned zombie, Janey Belle wanders the highways trying to maintain the balance between her former humanity and the monster that is... Zombie Tramp! 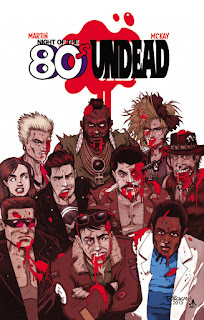 It's 1986, and Russia's last-ditch Cold War effort is to strike at our American excess lifestyle with bio-engineered Colombian cocaine. What happens when two girls out for a good time cross paths with a huge celebrity party hyped up on commie zombie blow? Radical undead action, man! Totally!