Eastbound & Down returns this weekend!!!
(I fucking love that show!)
So, thought I'd show my Kenny Powers tee design from last year! I call it Kf'nP... as in Kenny Fucking Powers mashed-up with KFC (thus the white suit/bollo tie) 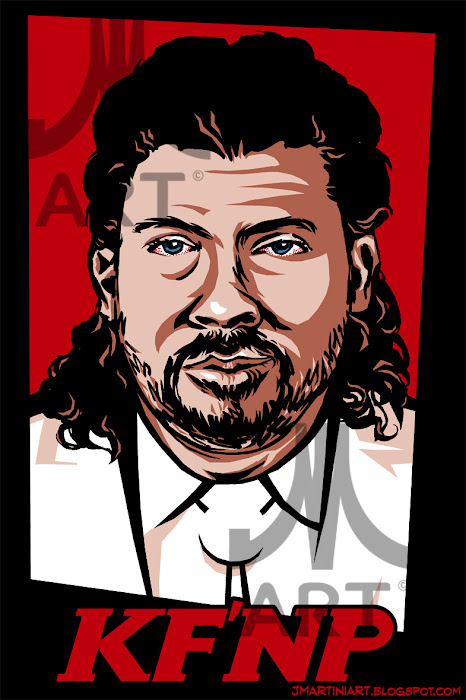 You can pick it up right now, in time to wear during the season, at my RedBubble.com shop!

Posted by Jason Martin at 7:07 AM No comments:

Email ThisBlogThis!Share to TwitterShare to FacebookShare to Pinterest
Labels: artwork, Eastbound and Down, for sale, Kenny Powers, Redbubble, t-shirt design

I've got a couple sketch cards on eBay this week! 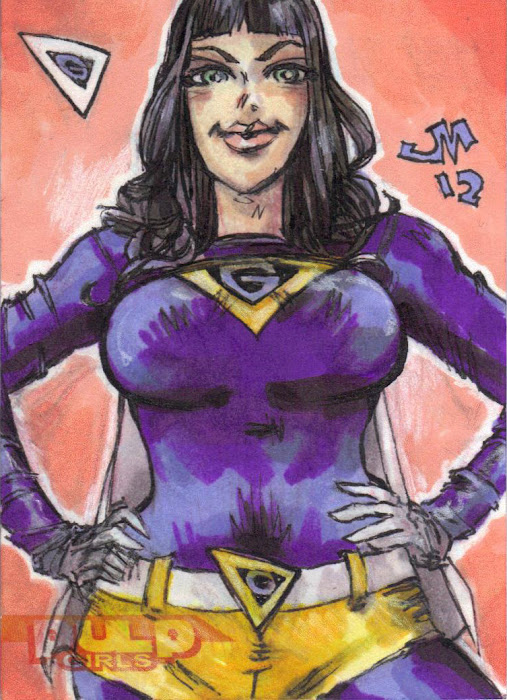 The first is the first sketch of a new concept/character I have, 'Dess (short for Goddess).

Basically it's a story idea I've had for wanting to do something with the Wonder Woman archetype... only my concept would have it more like Howard the Duck (with a superpowered amnesiac Goddess replacing the talking duck, and with a male sidekick replacing Beverly)!

Still working out the costume, but basically going for a late 70's/early 80's inspired satin/spandex number... with a bit of lounge Elvis/Evel Knievel style...

The second is an AE card from The Sketch Card Studio set for Dynamo5 (the Jay Faerber Image comics series), and the character Warchest. 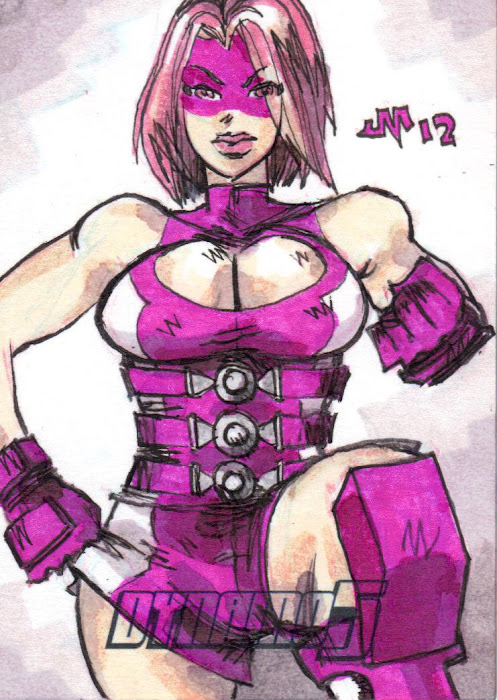 Posted by Jason Martin at 9:01 AM No comments:

And now here's the final design (at least for now) of my Tyrion Lannister/Peter Dinklage/Game of Thrones tee design! 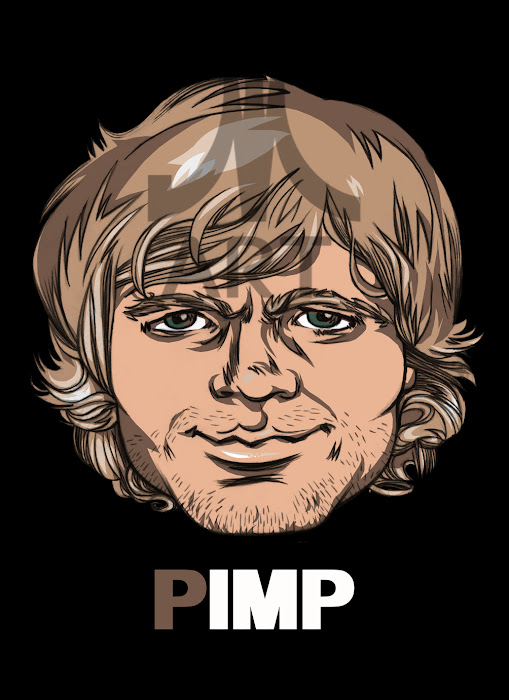 I decided to go with the text "PIMP", de-emphasizing the "P", to play on the words, as Dinklage's portrayal of the imp Tyrion in the show is rather pimp! And that in conjunction with just a head shot, as the character and actor's persona is so strong and recognizable (to fans).

You can pick one up now on RedBubble.com

TEE DESIGN: A game of previews 5

Okay, so last week I was showing and talking about the steps in creating my latest tee design, a fan art for Game of Thrones and the breakout character (of the show, I've not read the books), Tyrion Lannister, the impish sibling of the ruthless and powerful Lannister clan, played devilishly well by Peter Dinklage.

Last week I left off with the flat colors, and talked about how much work is done in the last stage, the shading. So here's a look at the image, now with shading and highlights... 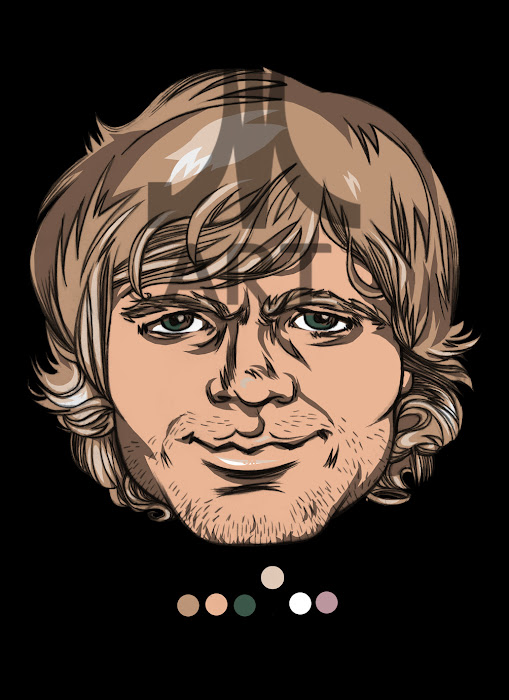 I also made some adjustments to the line work, shortening his face/jaw, and increasing his grin. You'll also notice the color dots in the image, those are the colors used in the full design. There are six colors, as most t-shirt sites require as few as six colors in a design. However, this is really a five color design, as I didn't end up using the pink color, except for the pits of the eyes...

Speaking of eyes, keep your peeled shortly for the finished shirt design and info on where you can pick it up!
Posted by Jason Martin at 10:49 AM 3 comments:

TEE DESIGN: A game of previews 4

All week I've been previewing my new Game of Thrones/Tyrion Lannister/Peter Dinklage t-shirt design, and today we get to see the last step before the finished artwork (sans any graphic elements), the flat colors. 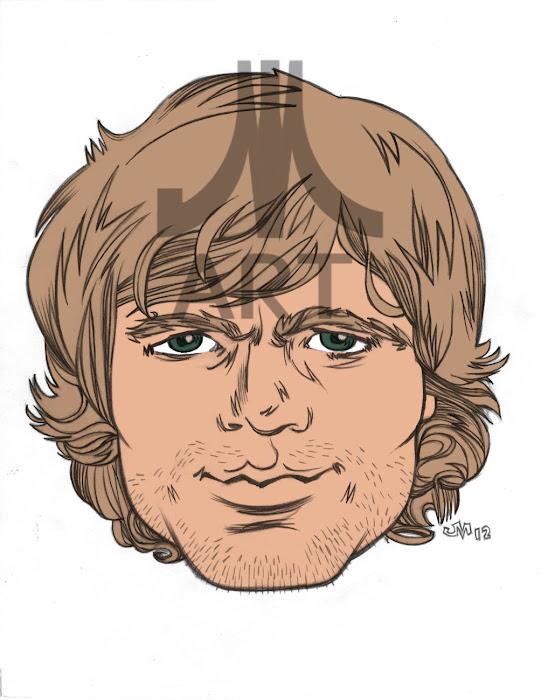 On something like a t-shirts design, the flat colors are even further removed from the finished look, because most shirt printers require a limited number of colors used in a design, making the colors more graphic in nature (because of the limitation in choices). Also, with a design that consists almost entirely of a face like this one, there's going to be more design to the colors as well (to make the design as a whole interesting). So unlike flatting colors for sequential art for example, where most of the heavy lifting is done at the flatting stage, shading a design like this can take nearly as long as the rest of the process combined (especially since I'm working in Photoshop and not a more graphic based program).

So tune in tomorrow to see the image come to more life!
Posted by Jason Martin at 8:00 AM No comments:

So yeah, last week I posted about the upcoming Fanboys VS Zombies comic, and how that was fairly close to a concept I'd been developing myself, and I lamented about missing out to other ideas beating mine to the punch. Since then the marketing of said zombie con concept has gone on, with double page ads in their books, and a full page ad in Previews... sigh. I just noticed something I hadn't before on their cover, that covers another story element of mine... double sigh.

Anyways, BleedingCool.com mentioned the book again earlier this week, but this time they linked to my previous blog post. So at least that's out there.

A Princess Leia mash-up with Tank Girl (and a great design too btw)... rather similar to an idea I had a while back, based on the popularity of my Molotov Cocktease fan art. Like I had done with Cherry Darling, I started dreaming up my own idea based on the character, and came up with this mash-up, to make my own...

Well, now there are other Leia mash-ups. Swell.
Again, likely just a good idea.
But who knows, this guy could've seen mine and thought up his own. His prerogative. After all, that's all I'd done.
Whatever.

Here's a look at a near finished version of of the artwork. 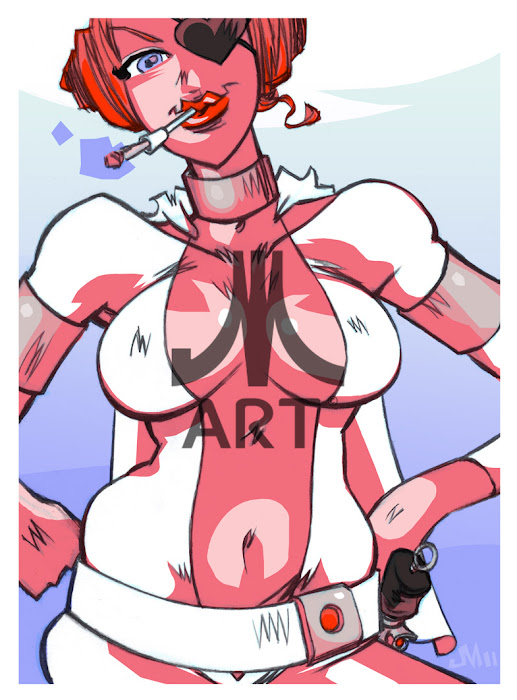 I plan to do more with her, including a likely shirt design.
Posted by Jason Martin at 2:50 PM No comments:

TEE DESIGN: A game of previews 3

Okay, so here's another look at my new Game of Thrones/Tyrion Lannister/Peter Dinklage t-shirt design! These are the finished lines, done in pencil (col erase, H, and 2B lead) from the reworked in Photoshop roughs, which I then printed out and redrew using my light box. 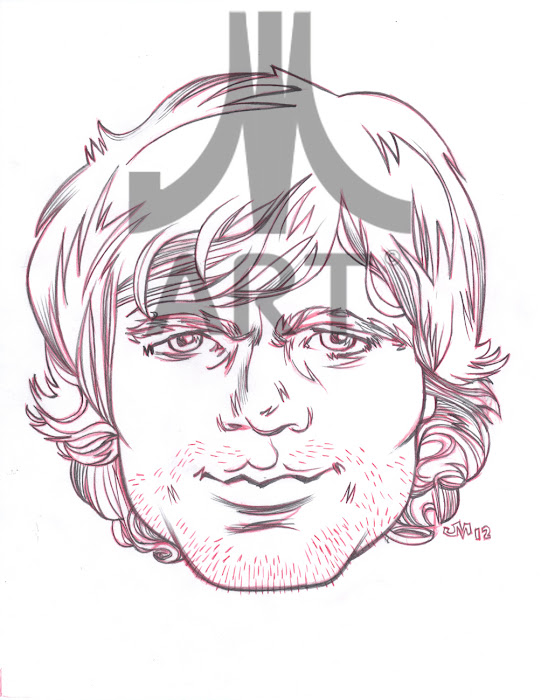 Tomorrow we'll get a look at the next step, flat colors!
Posted by Jason Martin at 8:00 AM No comments: