MEANWHILE AT THE MOVIES... Thor blasts into the comic book movie forefront!

I got a chance to see a preview screening of THOR this Saturday AM (in 3D), so here's my review (with mild spoilers)... 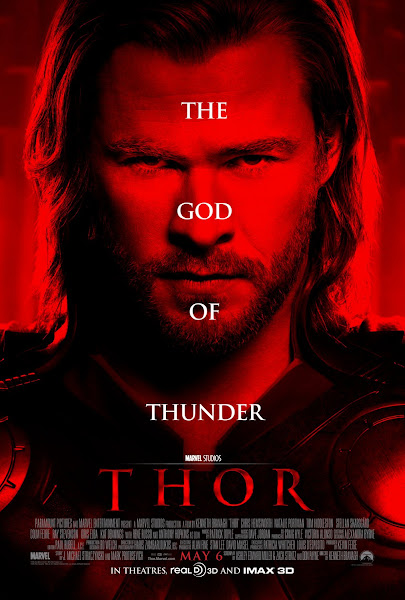 First off, let me just say, WOW!
I've never been a Thor fan, never cared for the character in the least, and I also was very un-enthused by the trailers for the movie (finding the Captain America trailers to be much more enticing, even though I'm equally un-enamoured with Cap), but dang, I am now! 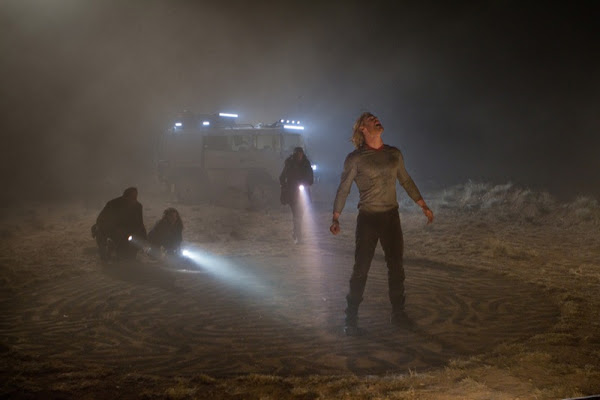 The movie Thor kicks ass, and is a bolt of fun from the first frame. The first half or so of the movie is downright magical, and had me gleefully squealing time and again at the comic book spectacle portrayed on screen, the pure imaginative anything goes action that can, until this time, only take place on the comic page... where you get to see the fantastic and beyond real brought to visual life, page after page... or in this case, scene after scene. Thor operates on a level no comic book movie to this point has, it goes further in depicting the out of this world elements of super heroes and fantasy than any other adaptation has to date (though I suspect Green Lantern could rival or surpass that). While we've had some truly great movies based on comic book characters, stories, or franchises, most of them are so firmly grounded in the real world, that they, due to the constraints of budget, and effects, focus more so on those elements of the comics than the books themselves. And while Thor certainly does it's fair share of that, it also seamlessly depicts the fantasy realm of Asgard and Norse gods at play and war.

Thor is shown doing things we haven't seen a comic book hero do on screen since maybe the early Superman films, only of course, a bit more fantastically thanks to 21st century movie making. He comes close to a Superman level of iconic heroism, and Chris Hemsworth turns in a Christopher Reeves level performance of braun and charisma. The rest of the cast is amazing too; you believe Natalie Portman as the passionate astrologist that goes ga ga for a fallen god, Kat Dennings is spot on as the young comedic relief, Stellan Skarsgard adds weight and consciance as the nordic born astrologist counterpart, the warriors three and other Asgardians bring their roles to life, and, most of all, Anthony Hopkins makes Odin THE father of all gods and quickly wiped away any doubts I had that he could pull off the role at his adavanced age, he's amazing and turns in his most memorable performance since Silence of the Lambs! I love this cast.

Then there's all the little geek things that shine. Seeing SHEILD in action, and getting their asses handed to them as they encounter the first omega level super power, who's merely mortal here... The Asgardians in battle... the Frost Giants, who while simplistically done, come off far better than they do in the previews... the massive Frost Giant beast... Hawkeye being onhand to potentially deal with Thor... the way the Frank Kirby Destroyer creates unholy carnage as his blasts pierce your eardrums!!!! Damn this is a fun movie, especially for us comic geeks!!! This is the most comic geeked I've been since the first X-Men and Spider-Man flicks, but agian, it delivers so much more geekyness, even IF you're not a fan of the character!

Then there's the 3D. It doesn't suck! It actually adds a bit to the movie. But like Green Hornet, the film should play well in 2D as well. The 3D isn't ever overbearing, or in your face, it just enhances things and stays pretty much in the background. I would recommend seeing the movie in 3D, but don't worry if you can't or don't. 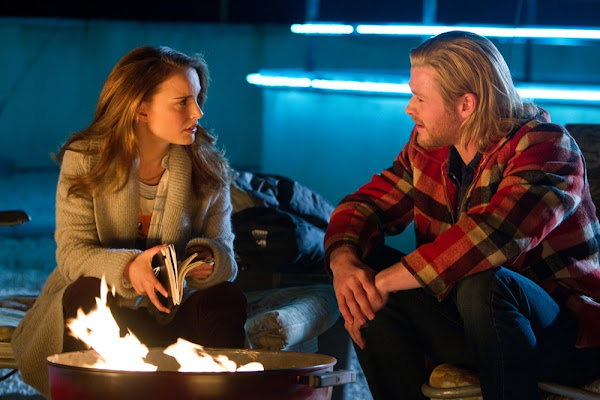 As much fun as the movie was, and as great as the first half to two-thirds were, I felt while the ending was solid, it lacked a bit of a punch. (MILD SPOILERS) After seeing the Asgardian on Frost carnage, the Asgardians dueling the Destroyer on Earth, and Thor in action against SHEILD, I felt the finale with Thor and Loki was a bit weak, and needed more drama. You never got the sense that Loki was any real match for Thor, in direct combat, so having them go toe to toe for the ending was pretty perfunctory.

Also, with Marvel running things now, and committed to an immersive universe where the characters cross over with each other, why not push that a bit more. Sure Hawkeye makes a cameo (and that was only tacked in via last minute reshoots), but can't Nick Fury show up more, or have the big SHEILD heavy be some other hero or villain from the Marvel universe? Don't be afraid to go further with these geek/character things, and give us a bit more of that...

All that said, get your ass to the theater and prepare for a genuine comic book treat. Thor delivers the goods on all counts and is a pure joy to behold! WOW!! Branagh perfectly blends the fantastic Asgardian story, with that of the god on Earth, and stages it all fairly epically. I can't wait to see it again! 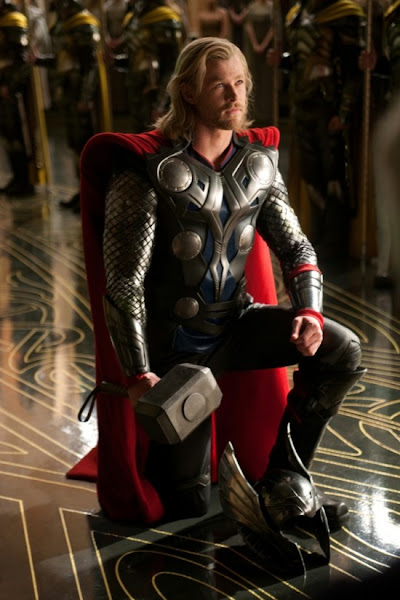 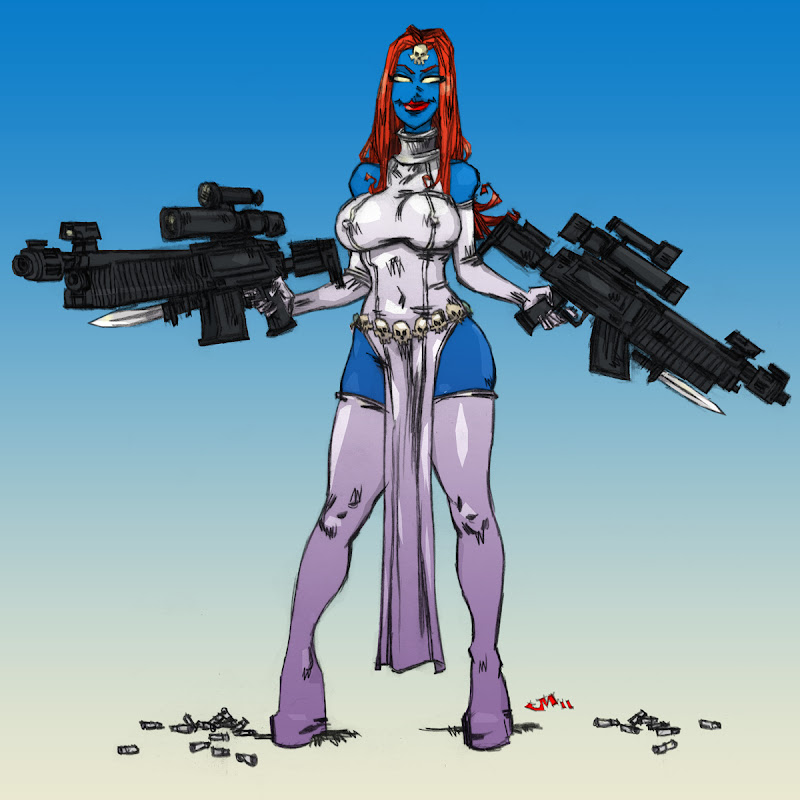 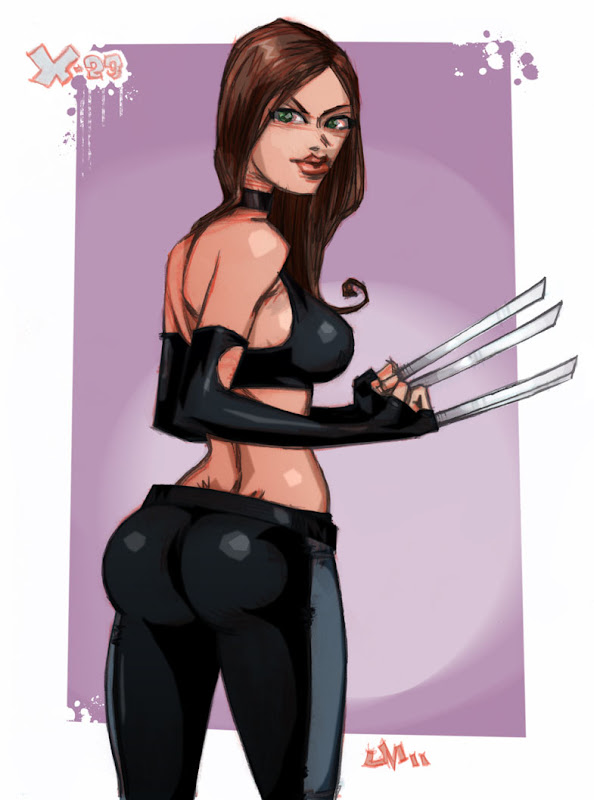 If you're interested in a commission, my rates are HERE
Posted by Jason Martin at 3:13 PM No comments:

MEANWHILE AT THE MOVIES... when tires become self aware, no one is safe, but we'll all have a good time.

In theaters now, but also on-demand, RUBBER (which I watched the other night in an insane double bill with Hobo with a Shotgun), is an inspired piece of film making. And it is a film, in the sense of the word, much more than a movie, in that it plays with the medium as an art form and toys with the audience in a meta way, but it doesn't get too caught up in all that to still deliver a fun movie along the way. 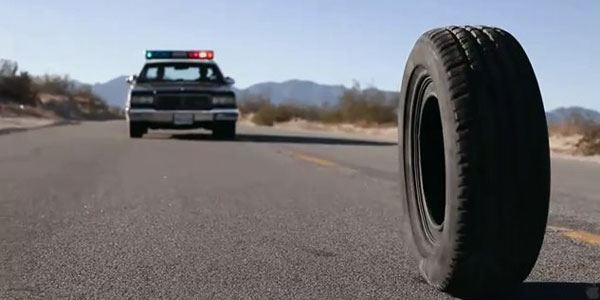 After first hearing about Rubber, as it confounded foreign audiences with it's story centered around a murderous tire... yes, murderous.tire. I knew I had to see this French horror(?) film as soon as possible.

Aside from the truly strange premise, Rubber goes further into the bizarre by introducing meta elements that play on expectations and mess with the conventions of movie making/watching. But for as radical as the story and narrative are, it's balanced by an accomplished hand at the wheel... If you thought early Cohen brothers were inspired film makers, or Michel Gondry was out there, make way for Quentin Dupieux! He's a mad man. But he also knows how to make a sharp and gorgeous looking film, that's as solid to watch, as it is insanely fun to experience. 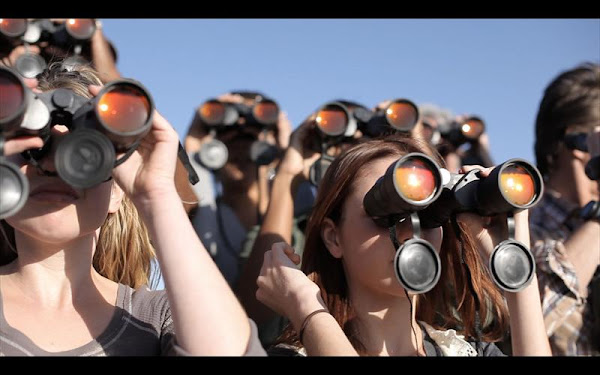 Binoculars, tires, tricycles, turkeys, no object is too mundane or left field to become a key element in the film. Why? No reason. If you can roll (pun not really intended) with this kind of anything goes, just for the heck of it cinema, then you should by all means see Rubber. You may find it as charming and intoxicatingly clever as we did. 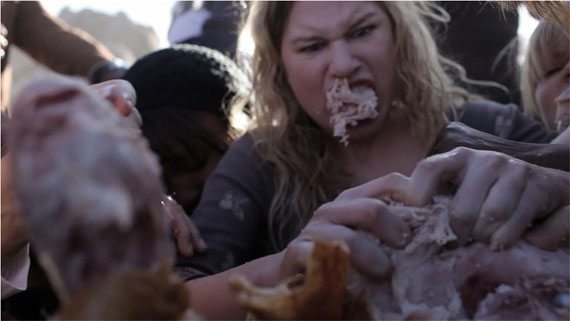 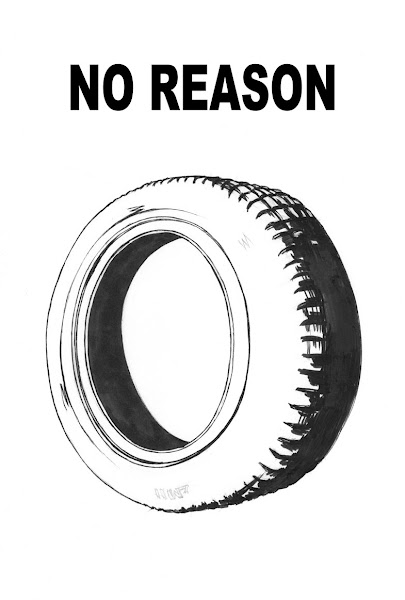 Posted by Jason Martin at 8:16 PM No comments:

MEANWHILE AT THE MOVIES... Hobo with a Vengeance!

In theaters in May, but on-demand now, HOBO WITH A SHOTGUN is part Grindhouse, part Clockwork Orange, and all bad-ass in-your-face creative buckshot!

The film is pretty special in that not only was it born from a fake Grindhouse trailer contest, but it actually delivers, and then some, a pitch perfect love letter to all the best of video era schlock, complete with 80's straight to video action star Rutger Hauer (who doesn't mail this one in, but rather gives a great performance), as the titular hobo. Our "hobo" rides the rails and only wants to save up enough in his coin sock for a lawn mower and another chance at life, but fate has brought him to a city just this side of hell, and pushes him to dig deep and invest in some pump action justice.

Pedofile santas, brazen pimps, a hooker with a heart of gold, and a family clan more sinister and twisted than any imagined, running rough shod over it all, must all face the force that is Hobo with a Shotgun. A simple down on his luck tramp turned wild bear with a taste for human flesh. Oh yeah, it's on. Not for the squeemish, the easily offended, or most anyone, but for those that like the crazy-shit-dial cranked to 11, run to the cinema with brown paper bag beverages, Hobo with a Shotgun will make you howl and squeal with delight... deliverance style!!!


And here's an awesome fan art of "The Plague", amazing characters that show up towards the end of the movie (you know a movie's great when perhaps the coolest thing isn't even key to, or needed in, the movie)...

Posted by Jason Martin at 12:52 AM No comments:

Email ThisBlogThis!Share to TwitterShare to FacebookShare to Pinterest
Labels: grindhouse, Hobo with a Shotgun, movies, reviews

The big annual indie comics fest in my hometown of Portland (Oregon), STUMPTOWN, is this weekend (Saturday and Sunday), and I'll be exhibiting at space E4.

I haven't done this show since 2008, but it's a vibrant, growing show, that happens to skew decidedly art/alt comix, or "indie" (with air quotes)... ;)
but hey, I love all types of comics, I'm no snob (mainstream or otherwise), and it's truly a great place to see a metric ton of talented creators and unique comic book makers (the show is creator-centric).

Plus I'll have my new YETi books (now in it's second limited edti, which should fit in rather well...
and then there's the SRGraphics books, like ZOMBIE TRAMP (we'll see how she handles a tough crowd), and of course books like Gnome and Wolves will be right at home!

Hope to see you there!
Posted by Jason Martin at 8:30 PM No comments:

Here's hoping the new (and long delayed) Beastie's disc is a return to form (after a couple not so epic discs in the aughts).
If this video is any indication, hells yes it is!

Posted by Jason Martin at 2:13 PM No comments:

Email ThisBlogThis!Share to TwitterShare to FacebookShare to Pinterest
Labels: beastie boys, in case u missed it, music, video

OMG! Rise of the Planet of the Apes looks good!!!

Gone is the absurd Burton abomination, and here is a hard sci-fi spin more in line with 28 Days Later and the zombie apocalypse... with apes!
I always loved the Planet of the Apes movies as a kid, and perhaps what was most fascinating about them was the way they were set in reality, more than fantasy... or a fantasy born of reality. This looks to take that to the next level, with a top flight cast, and effects in tow!
Wow!
Can't wait!
Posted by Jason Martin at 10:04 AM No comments:

Email ThisBlogThis!Share to TwitterShare to FacebookShare to Pinterest
Labels: in case u missed it, movies, Planet of the Apes, trailers, video
Newer Posts Older Posts Home
Subscribe to: Posts (Atom)