An Olympic skier turned living weapon, Swiss Army Woman proudly fights for her country, and just like their famous Swiss Army technology, she has any weapon conveniently within... leg's reach!


Chocolate Barons, Evil Bankers, and Giant Alien Clocks... all bent on world domination!! Good thing the Swiss Army have a special operative with every weapon, tool, or gadget their country requires... all attached to her right thigh!

Upon losing her leg in a freak ski accident in the Swiss Alps, a young woman is outfitted with top secret technology (that's all too familiar), and becomes a one woman weapons program...

Now, instead of returning to her normal life, she proudly fights to defend Swiss interests at home and abroad. She is any tool the Swiss need, for any job her nation requires...

She is... THE SWISS ARMY WOMAN!

It's Cherry Darling meets Batman The Animated Series by way of Switzerland!! 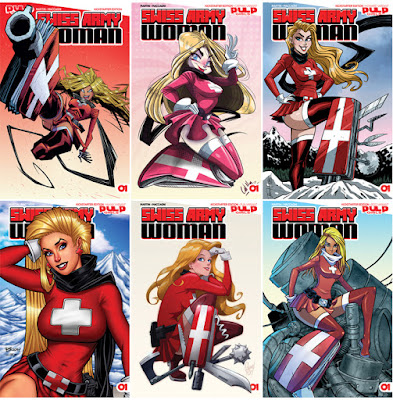 You can order your copies now HERE

Or you can pick up the regular edition of the book from me after the Kickstarter is fulfilled around March (I will add it to my store and post about it).

And I still have some limited inventory of the recent 2019 Swiss Army Woman preview book in my store.

Be sure to check it out!!

Posted by Jason Martin at 2:16 PM No comments: