In addition to writing Vampblade every month, I also co-write Zombie Tramp from time to time, and work on special issues and more, and right now I'm currently also writing the Danger Doll Squad series (which crosses over three Danger Zone titles; Zombie Tramp, Vampblade, and DollFace). Issue 0 came out in August and set the stage for the mini-series, and now Danger Doll Squad issue 1 comes out in stores this week!

I'm extra excited for issue one because it will also feature a cover that I did. In this case it's a limited cover that's exclusive to me:
JMart exclusive variant (cover J) - limited to 250 copies 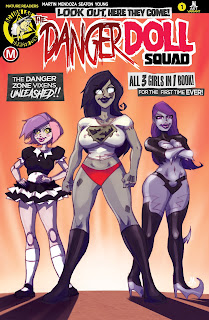 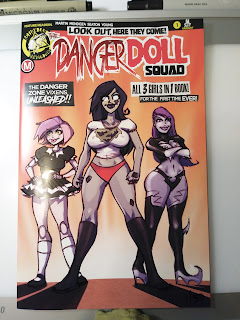 The artwork is an homage to the famous Justice League cartoon series artwork that re-imagines the girls as Superman, Batman, and Wonder Woman (of sorts)!!

These books will be sold directly by me, come signed, and are now available in my store (and on eBay)

Posted by Jason Martin at 11:57 AM No comments: