Following season one’s 12 issue run, which just wrapped up, my genre blending monthly series will resume this March with an all new season two and first issue... which you can pre-order now! 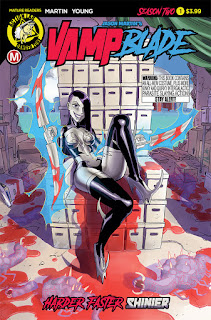 Wielding other-dimensional blades that allow her to cosplay the perfect costume for any situation, comic shop owner Katie Carva continues her secret fight against the hidden vampiric parasites (aka TSD's - translucent space dicks!) that threaten mankind in an all new second season of the popular Action Lab: Danger Zone series!

Perfect for fans of my work, or concepts like Harley Quinn or Ash vs Evil Dead, season two is a great jumping on point, but also continues the kinky and quirky intergalactic parasite slaying story thousands of fans already love.

It’s really exciting to take what we’ve done - along with my amazing creative team of all-pro artistic talents like Winston Young, and Marco Maccagni – and continue that on a larger stage. And now that Katie’s merged with the Vampblades, this new paradigm in season two will just build and expand on things... making the book harder, faster... shinier! 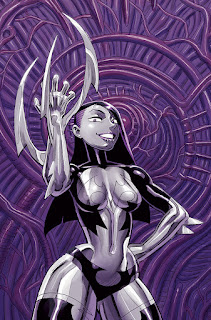 Posted by Jason Martin at 11:23 AM No comments: